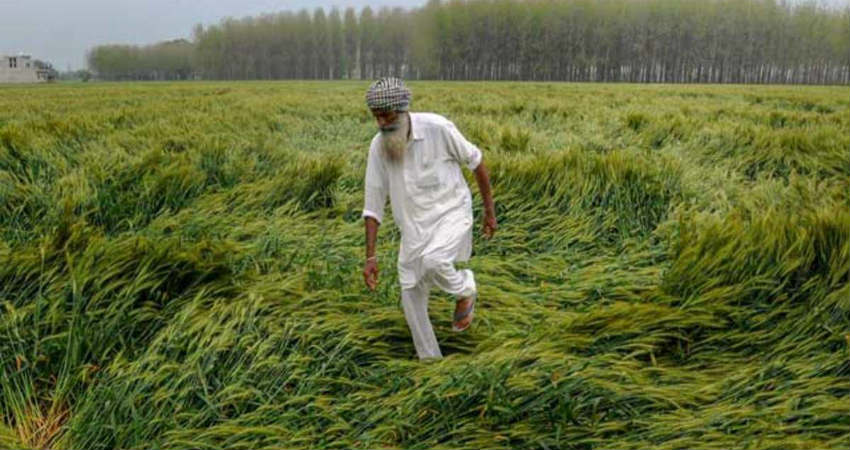 In the last week, adverse weather activity lashed Northern plains, Central and eastern parts of the country. There is crop damage in the major cultivating regions. Heavy rains accompanied with strong winds and hailstorms struck parts of Punjab, Haryana, Rajasthan, and Uttar Pradesh. Amritsar, Patiala, Ludhiana, Pathankot, Bhatinda, Fazilka, Hoshiarpur, Ropar, Ambala, and Karnal observed intense rains on 10th and 11th March. Farmers of north Rajasthan are facing a double whammy, the locust attack on their Rabi crop earlier in the season and now untimely rains lashing Ganganagar, Hanumangarh, Bikaner, and Phalodi. Also, persistent unseasonal heavy rains have damaged standing crops in east Madhya Pradesh, Bihar, Chhattisgarh, and Jharkhand. There are reports of hailstorms affecting many villages in Mandla, Seoni, Chhindwara, Umaria, Ambikapur, Bilaspur, Raipur and Rajnanadgaon. There are some 28 deaths in Uttar Pradesh and 4 in Bihar reported on account of lightning strikes.

Spread and scare of the Corona Virus is also seen impacting the demand directly and hurting farmers. Dwindling prices of vegetables across many parts of the country are leaving growers in the lurch. Restricted flights and reduced frequency has also affected exports and slow down on the demand for fruits and vegetable in West Asia.

The spread of coronavirus around the world is driving scare and impacting the economy. The virus has spread to 120 countries reporting over 1,60,000 cases forcing a few of them to go on lockdown mode. Also, the WHO has called COVID-19 a global pandemic and advised the utmost care and precautions. In India, 110 cases have been reported so far with 2 confirmed death in Kalburgi, Karnataka and another one in Delhi. The government has put all visas except diplomatic on suspension till April 15. Foreign travel has nearly been banned. The only solace around is a little slow down of reported cases in China now, after reaching a hiatus in early March. But this doesn’t promise an early exit of virus and therefore no complacency thereof.

The Indian subcontinent is slated to see, the rising temperature of the mid-30s or beyond in April over most parts. However, the European countries, the northern half of the The United States and hinterland China can expect temperatures in low 30s only towards the fag end of June and July. Accordingly, an inordinate and enduring fight needs to be worked out to contain and restrict the fatality figure of COVID 19. President of The United States has declared it as a national emergency.

Unlike the last two, the week commencing 15th of March is likely to spare the agriculture bowl across the northern plains of any intense weather activity. The eastern half of Central India is likely to be the focus of significant weather. Western and southern parts are mostly going to remain silent albeit with rising temperatures.

A weak western disturbance will arrive and affect weather across hills of north India between 17th and 20th. An active western disturbance will follow this and will cause moderate to heavy rain and snow on 21st and 22nd over J&K, Ladakh, and Himachal Pradesh. Plains of north India will largely remain free from any significant weather activity except on last day. The day temperature will remain suppressed, though with a rising trend to stay in the high 20s.

Like the last week, Gujarat and west Madhya Pradesh are expected to remain free from any significant weather activity throughout the week. East Madhya Pradesh, Vidharba, Marathwada, Chhattisgarh, and Odisha will have light to moderate rains/ thundershower from 17th till 21st March. Intense thunderstorm accompanied by hail and strong winds and possible lightning strikes is likely over Odisha and Chhattisgarh between 19th and 21st March.

Rayalaseema is going to be the hottest pocket during the week. Anantapur, Kurnool and Cuddapah may touch 40-degree centigrade on a few days. Strong thunderstorm activity is likely over Telangana and Coastal Andhra Pradesh on 21st and 22nd. Tamil Nadu, Kerala, and south interior Karnataka will experience light to moderate pre-monsoon showers on 21st and 22nd.

Mostly dry weather conditions are likely for Delhi-NCR, there are chances of light rain on 20thand 21st. Day temperatures will rise to touch 30-degree mark in the second half of the week, nights will remain pleasant and cool with minimum temperatures in the range of 14 to 16-degree centigrade

Weather conditions similar to the last week will prevail in Chennai. Hot & humid days with sea breeze in the evening will be a regular feature. There are chances of light rain and showers on 21st and 22nd. Day and night temperatures to remain in mid-30 s and mid 20 s respectively.