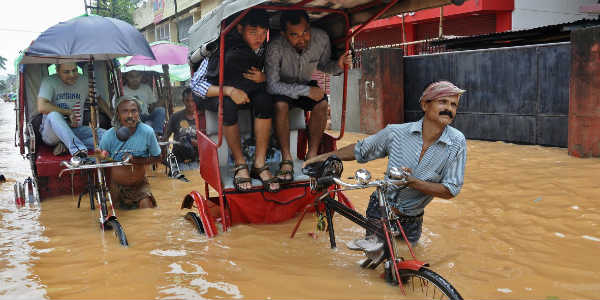 Heavy rains have made the situation grim over Northeast India. The situation in Assam has worsened so much that more than 4 lakhs of people and over hundreds of villages in several districts of Assam have been affected. Lakhs of people have been displaced from their homes and killed two as well.

The flood situation affected over 800 villages across several districts of Assam that includes Lakhimpur, Jorhat, Golaghat, Biswanath, Karimgaj, Sonitpur, Darrang, Barpeta and Nagaon. In addition to this, over 14, 884 hectares of farmland has also been affected badly with these torrential showers.

The heavy rains have not spared the adjoining state of Arunachal Pradesh as well that has been a spectator of a series of landslides that even resulted in cutting off road communication to several districts. The road between Itanagar and Naharlagun had remained cut off on Saturday until Monday with a landslide taking away its major portion. 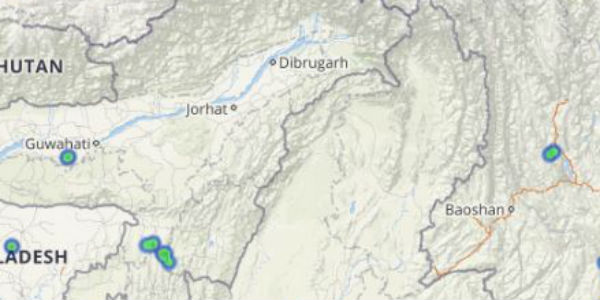 As per Skymet Weather, as of now, relief is not anticipated over the northeastern states and moderate to heavy rains are expected to lash Northeast India that would further aggravate the situation. The reason for these incessant showers can be attributed to a trough that is extending from Punjab to Manipur across Uttar Pradesh, Bihar and North West Bengal.

In the wake of this weather system, many parts of Assam and Meghalaya are expected to get thrashed by heavy showers again. The northern parts of Assam like North Lakhimpur and Pasighat are flood prone as well and thus the situation is worse there.

Moreover, the water levels are swelling in the Brahmaputra and Barak rivers and several of its tributaries. These factors are too responsible for aggravating the flooding situation in Assam. As heavy rains are expected to continue for next two to three days, people in Assam cannot brace for relief soon.

Rains to increase once again over Maharashtra including Mumbai

Weather update and forecast for September 19 across India

East Rajasthan to see revival in rains after long, showers may increase in parts of Gujarat