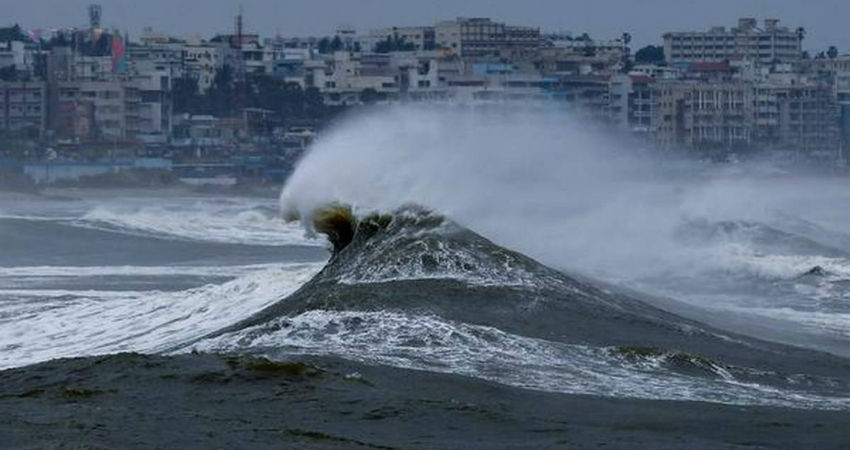 Even after weakening, cyclone Fani managed to give light to moderate rain and thundershower activities accompanied with strong winds over parts of West Bengal during the last 24 hours. In the last 24 hours from 08:30 am on Saturday, Berhampore recorded 11 mm of rain, followed by Darjeeling 7 mm, Kalaikunda 4.1 mm, Jalpaiguri 3.7 mm and Malda 3.4 mm. All these weather conditions occurred in association with cyclone Fani’s northeastwards movement. However, weather in Kolkata remained almost dry with partly cloudy to cloudy sky conditions. The maximum temperature recorded by the city was 29.1˚C, which was 6 degrees below normal. The minimum temperature was also 2 degree below normal at 24.2˚C.

Updated on May 5, 2019 11:55 AM: Fani to give widespread rains over the northeastern India

Such widespread weather activities occurred due to northeastward movement of cyclonic storm Fani. At present, the same system has weakened into a low-pressure area and lies over eastern parts of Nagaland, Upper Assam, Arunachal Pradesh and adjoining North Myanmar.

This weather system would be moving further eastwards and becoming insignificant for the northeastern states of India after the next 6 to 12 hours. In fact, as the system is moving away, weather conditions will also start improving in Northeast India.

The Depression over Bangladesh has become insignificant and now lies as an upper air trough from Arunachal Pradesh to North Bengal. The rain intensity is expected to decrease significantly over the northeastern states. However, light to moderate rains would continue over Arunachal Pradesh, Assam and Meghalaya. While, light rains would be a sight over rest of the northeastern states and Sub Himalayan West Bengal and Sikkim with light to moderate winds tagged along. Isolated thunderstorm and rain is a possibility over Coastal parts of Odisha. Odisha too would witness rise in temperature.

Updated on May 4, 2019 7:00 PM: Temperatures drop in Bihar and Jharkhand due to Cyclone Fani

Due to Cyclone Fani, last night most parts of South Jharkhand experienced heavy to very heavy rains with very strong winds/squalls reaching 60-70 kmph. While, some parts of East and South Bihar, rest of Jharkhand witnessed light to moderate rain and thundershowers. In the last 24 hours, from 8:30 am on Friday Farbesganj, Purnia, Bhagalpur and Chapra witnessed 33.4 mm, 15.1 mm, 31.8 mm and 13.4 mm of rains, respectively.

While in Jharkhand, Jamshedpur witnessed the day temperature settling at 27.2°C, which is a drop of almost 12 degrees. It also recorded 64.2 mm of good rain.

May 5 onward, most parts of Bihar would see normal pattern of wind flow. Hence, gradual rise in temperatures are expected. Jharkhand would see dry weather conditions with rise in temperature from today itself. There is possibility of light thunderstorm activity on May 5 due to the remnants of Cyclone Fani.

After being hit by the Extremely Severe Cyclone Fani and facing a huge loss to life and property, the coastal state of Odisha is now going to experience some relief in terms of weather.

Currently, the intensity of the storm has reduced significantly as it has moved away in an eastward direction. Presently, the Cyclonic Storm is lying over Northwest Bangladesh as a Deep Depression.

Over the next 24 hours, normal pattern of winds are likely to blow which will gradually lead to rise in temperatures and humid weather along the coastal stations.

Updated on May 4, 2019 2:00 PM: Torrential rains to hit Cooch Behar, Jalpaiguri and Siliguri in the wake of Cyclone Fani

As per the experts, the intensity of rains would increase over the central districts and as well as over Sub Himalayan West Bengal and Sikkim. Places like Burdhman, Malda, North Dinajpur, South Dinajpur, Cooch Behar, Jalpaiguri, Siliguri would receive moderate to heavy rains. With time, the intensity is expected to reduce over Gangetic West Bengal but for next 24 hours, fairly widespread rain and thundershowers would continue.

Updated on May 4, 2019 11:00 AM: After wreaking havoc in India, Cyclone Fani to make an arrival in Bangladesh

After making landfall in India Friday morning, Cyclone Fani is now headed in the east-northeast direction towards Bangladesh and is likely to hit the coastal country of Bangladesh today. However, by this time, the system would have weakened further due to lack of enough moisture content.

Already, necessary control rooms have been opened in 19 coastal districts of the country.

People living in the coastal areas where Cyclone Fani is going to impact have been asked to remain watchful. A total of 56,000 volunteers have been kept on hold.

Due to the land interaction, now the intensity of Cyclone Fani would eventually keep weakening because the moisture feed from the sea has now reduced drastically. This system is expected to keep moving in northeast direction along the coastal districts of Odisha.

It has already started raining heavily in South Bengal. Places like Digha, Diamond Harbour and Kolkata are already under the influence of storm Fani. The wind speed at present is 25 kmph.

Places like Bankura, Purulia, Jhargaon, Midnapore, Hugli, Howrah, Kolkata and 24 Parganas will be the majorly affected districts in West Bengal in wake of Cyclone Fani.

As Cyclone Fani made landfall over Puri near Odisha Coast, One person died due to the uprooting of trees in Sakhigopal area in Puri and some houses got damaged due to strong winds and heavy rain . Over 1 Million peopless have been shifted to temporary shelters in Odisha as the most severe Cyclone Fani has made landafall over Puri, Odisha.

Andhra Pradesh: People take refuge in a shelter in Ichchapuram town of Srikakulam district. Some houses were damaged in the rain and wind experienced by the district today. IMD says the system influence will be prevalent in Srikakulam for next 12 hours. #CycloneFani pic.twitter.com/qIkVEnjStZ

Cyclone Fani makes landfall at Puri near Odisha Coast. The eye of the storm has entered the land mass, triggering torrential rains and damaging winds. Presently, winds speed is around 180-190 kmph gusting up to 200-220 kmph. It will almost last for two hours, as the system passes through the land. System is expected to weaken, as it is now travelling inland.

Cyclone Fani is all set to make landfall at Puri coast in Odisha any time now. Fani is about 40 km far away from the coast.Extremely heavy rains with squally winds have already started lashing the coastal parts of Odisha.

Next two to three hours will remain very crucial for Odisha, due to extreme weather conditions in terms of torrential rains, damaging winds, flooding uprooting of trees, snapping of communication and electricity poles.

Updated on May 2, 2019 7:30 PM: Cyclone Fani to make landfall near Puri, Heavy rain in Odisha, West Bengal and Andhra Pradesh

Cyclone Fani is expected to cross Odisha Coast by or before forenoon of May 3. Just before striking the coast, it would weaken slightly and make landfall as a very severe cyclonic storm near Puri.

Therefore, we expect extremely heavy rains over Coastal Odisha. Light to moderate are likely over North Coastal Andhra Pradesh and rest of Odisha. By late afternoon, rain belt will cover Gangetic West Bengal, many parts of Jharkhand and East Bihar. These areas will also witness moderate to heavy rains.

However, rains will reduce over Arunachal Pradesh, East Assam, Nagaland and Manipur. While, Meghalaya, Tripura and West Assam will receive good rains.

As Cyclone Fani is nearing over Odisha and Andhra Pradesh coasts, a total of 103 trains have been cancelled while 2 have been diverted. Some of the major trains which have been cancelled include Howrah-Chennai Central Coromandal Express, Patna-Eranakulam Express, New Delhi-Bhubaneswar Rajdhani Express, Howrah-Hyderabad East Coast Express, and Bhubaneswar-Rameswaram Express.

Updated on May 1, 2019 6:30 PM:As Cyclone Fani will cross West Bengal, Heavy rains will be witnessed by the states on May 3-4
With Extremely Severe Cyclone Fani gearing up for landfall at Odisha coast, West Bengal has also started bracing up for facing the brunt. By that time cyclone Fani would reach West Bengal, it would have weakened into a cyclonic storm only.

Intensity of Rain will be on lower side on May 2. By May 3 states of West Bengal such as Medinipur, 24 South Parganas, Kolkata, Howrah, Bankura, Hooghly and Bardhaman is expected to witness heavy to very heavy rains.

Odisha is now gearing up for heavy to extremely heavy rains accompanied with damaging winds during the during next 2 days. State and national authorities have put Odisha on alert against weather conditions, particularly in the following districts of Ganjam, Gajapati, Gopalpur, Khurda, Bhubaneswar, Puri, Jagatsinghpur, Rayagada, Kendrapara, Bhadrak, Jajpur, Paradip and Balasore.

Updated On May 1, 2019 3:00 PM: Extremely Severe cyclone Fani to effect Northeast states, heavy rains, strong winds are expected by May 5

The northeastern states have been witnessing moderate to heavy rains since the last three to four days. A Cyclonic Circulation is persisting over Assam and adjoining areas. Thus, rains have increased over the areas and good rains would continue till May 2. Thereafter, there can be a slight dip in the intensity of rains as Extremely Severe Cyclone Fani would move over North Bay of Bengal.

However, on May 5, heavy to very heavy rains will be seen over many parts of the northeastern states as the remnants of Cyclone Fani would reach northeastern parts of the country bringing along heavy rains. During this time, lightning strikes, flash floods and strong winds cannot be ruled out.