Cyclone getting stronger and frequent, blame it on climate change

Cyclonic storms are well known weather phenomenon across the world. They are known for causing destruction while travelling through landmass, bringing torrential rains and damage potential winds.

Like the other weather phenomena across the world, this pattern of cyclonic storms has also not remained untouched by the manmade demon ‘climate change’. With rise in global temperatures and climate warming, tropical storms have taken an aggressive turn in the last few years.

It has been noted that in the last three decades, we have seen tremendous rise both in the frequency as well as the intensity of these cyclonic storms. In fact, strongest of the storms, which is of category 5, are getting further stronger. 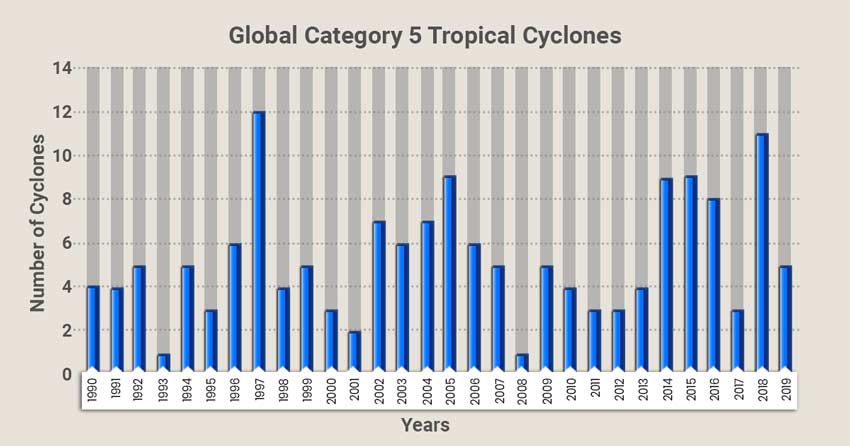 According to statistics, world has witnessed 149 category 5 cyclonic storms between 1990 and 2019. Out of this, 59 storms have been recorded in the last decade itself.

Hurricane, typhoons and cyclone are the different names kept in different regions across the world. In India, we term these storms by the name of cyclones or tropical storms. These cyclonic storms are the heat engines converting heat energy of the ocean into kinetic energy (winds).

Oceanic waters and their heat potential are the key drivers for formation of any storm. Pacific is the largest and deepest ocean spanning across 63 million sq miles. It contains more than half of the free water on the earth. It extends to both Northern Hemisphere as well as Southern Hemisphere and thus witnesses maximum number of storms in the world.

Apart from this, the ocean is host to most dreaded oceanic phenomenon of El Niño, which in turn trigger a greater number of storms, drives Monsoon and raises global temperatures. Cyclones have strong connection with El Niño and IOD (Indian Ocean Dipole).

Presence of IOD also keeps the sea surface temperatures warm, which is the foremost requirement for formation of cyclonic storms. The latest example was seen in India in 2019 that hosted nine cyclonic storms. Though they were not Category 5 storm but there was definitely an increase in frequency.

As we progress further, we are afraid that we would see more such adverse impact of climate change and global warming on the weather across the globe.