Cyclone Yaas forms over the Bay of Bengal, intensify to become severe cyclone by evening 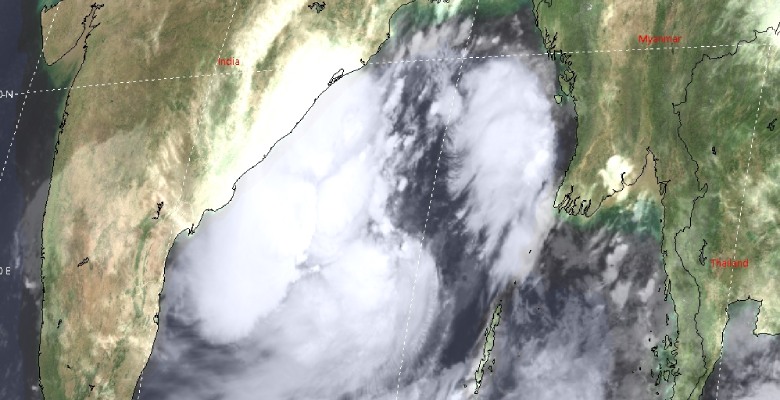 Cyclone striking coast is a curse and 2 of them in quick succession is a cripping disaster. Within a week of cyclone Tauktae striking Gujarat, a renewed threat emerged in the Bay of Bengal, with storm Yaas raging over East Central and adjoining West Central Bay of Bengal. Cyclone Yaas, as named by Oman, is centered around 16.2degree north and 89.8degree east, about 520km southeast of Paradip port of Odisha and 600km south-southeast of Digha, seaside resort town of West Bengal.

Storm Yaas, the first cyclone of this season in the Bay of Bengal, has intensified rapidly from a well-marked low pressure to a cyclonic storm in less than 24 hours. A similar tendency is likely to extend and the storm is swiftly expected to turn severe by today evening itself. Yaas has moved slowly in the past 6 hours and gathered strength and thereby increasing wind speed in its inner ring to 75kmh, gusting to 90kmh.

The satellite imagery has depicted tightly wrapped features around low-level cyclonic circulation with a significant equatorward and poleward flow. Cyclone has undergone pronounced consolidation and the pressure field has dropped substantially around the center to measure 992 millibars against 1000 millibars yesterday. Other environmental conditions continue to be favorable with light to moderate vertical wind shear and very warm sea surface temperature (30-31 degrees Celsius).

Cyclone Yaas amidst ongoing intensification is likely to move north-northwest towards West Bengal and Odisha coast. The storm will also strengthen further to a very severe cyclonic storm by tomorrow early morning increasing its wind potential with speed in excess of 150kmh. Outers of the storm will reach the coastline of Andhra Pradesh, Odisha, and West Bengal today itself and initiate rainfall on and offshore. Cyclone Yaas is likely to make landfall on 26th May forenoon hours, crossing the coast between Paradip (Odisha) and Diamond Harbour in the delta area of West Bengal.