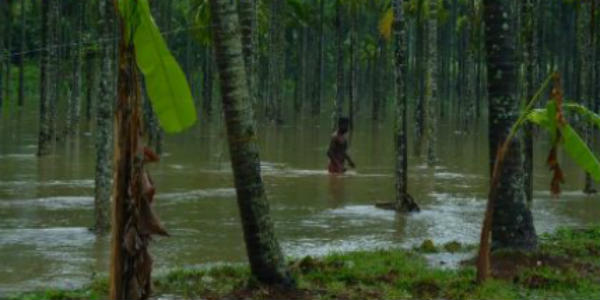 The month of March announces the arrival of summers for the southern parts of India. However, Pre-Monsoon activities become prevalent during the second half of the month in association of the trough that forms over the southern region of the country.

This trough or wind discontinuity as we call it, is formed due to excessive temperatures across the land and significantly low temperature on either side of the water bodies, namely Arabian Sea and Bay of Bengal.

This time, a freak depression was present in the Arabian Sea in proximity of the southern parts of the country, particularly, Kerala which persisted for about three days in its weakened form. The movement of this system from the Indian Ocean to the Arabian Sea caused an extended spell of rains over South India including the states of Kerala, Karnataka, Tamil Nadu and even Lakshadweep. Moreover, even parts of Goa recorded some good showers during this time extending even up to Mumbai.

Extremely heavy rains were seen over Lakshadweep with the region recording repeated three digit rains and Tuticorin witnessing 200 mm on one of the days. Additionally, most of the locations in the southern parts have already crossed their monthly mean, which is not as high during the month of March.

Some cities including Bengaluru, Kochi, Kozhikode, Thiruvananthapuram have even far exceeded their normal rains. Areas that usually do not see much rains also witnessed some rainfall during this period.

Now, the trough along Kerala and Karnataka coast is expected to cause thunderstorm and thundershowers over Kerala, South Interior Karnataka and Tamil Nadu for the next two days clearing thereafter.