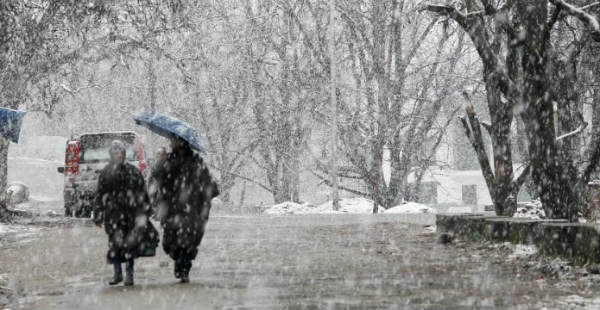 Fairly widespread rain and thundershowers continued to lash Jammu and Kashmir, Himachal Pradesh and Uttarakhand during the last 24 hours. All thanks to the passage of an active Western Disturbance.

Not only this, upper reaches of Himachal Pradesh and Uttarakhand have also received snowfall. According to Skymet Weather, temperatures usually remain high and snowfall is very rare in the month of May.

Meanwhile, Rohtang Pass was covered under 15 cm of snow while Keylong and Gondla recorded 4 cm and 3 cm of fresh snow, each. In fact, the fresh and untimely snowfall led to cold wave conditions in these areas. There was a steep drop in the maximum temperatures by almost 15-16 degrees on Tuesday. Keylong recorded day maximum at 3°C, which is not common during this time of the year.

Incessant snowfall since last night also prompted Uttarakhand state authorities to temporarily halt the yatra to Kedarnath. According to the advisory issued, devotees were not allowed to move beyond Linchauli and Bhimbali.

Besides this, moderate to heavy rain and thundershowers also triggered landslide and road blockage over many parts of Uttarakhand.

Moving ahead, we can now expect some relief as the weather activity is likely to reduce gradually. According to Skymet Weather, the Western Disturbance is now moving away but remnants of the system would continue to give rain and thundershowers over Jammu and Kashmir, Himachal Pradesh and Uttarakhand for the next 48 hours. Thereafter, the weather will start clearing up.

Another fresh Western Disturbance is likely to approach Jammu and Kashmir around May 13. However, weather models indicate that it would be feeble in nature.