Curious as to when Monsoon arrives in your city, check out normal onset dates here

The countdown to Southwest Monsoon 2019 has begun and with this, the curiosity about its onset has also doubled among people hailing from all fields.

The Monsoon season contributes around 70% of the country’s annual rainfall. Thus, its relevance becomes even more. Monsoon rains have a direct bearing on agriculture and economy, therefore a lot depends on them.

Although there is no relation between the onset and performance of the Monsoon but a lot depends on the time of its arrival. Timely arrival could bring cheers to farmers, while delayed one could impact the Kharif crop season.

Let us have a look at the normal onset dates of Southwest Monsoon in your city. Before beginning, we would like to tell you that five days prior or five days later the given date is considered to be a normal onset. 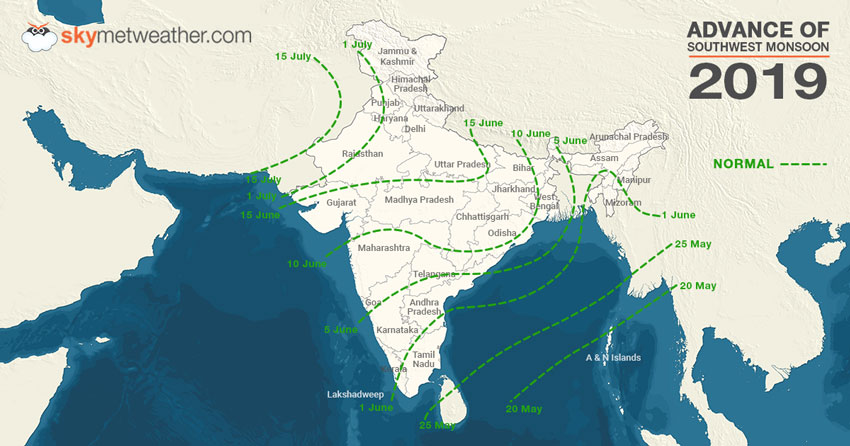 Before reaching the Indian mainland, Monsoon first marks its attendance over Andaman and Nicobar Islands around May 20. From thereon, the Monsoon current takes around 10 days before making onset over Kerala on June 1, which is the entry point to India for this four-month long season.

During its first phase, Monsoon covers Kochi, Trivandrum and Chennai along with most parts of Tamil Nadu. Simultaneously, it also reaches Northeast India, covering southern parts such as Manipur, Mizoram and Tripura.

Initial phase of Monsoon witnesses progress of Northern Limit of Monsoon (NLM) in an interval of five days.

Next stop is the most awaited one as Monsoon reaches Mumbai and Kolkata around June 10. It covers most parts of Maharashtra, Odisha and West Bengal and some parts of Chhattisgarh, Jharkhand and Bihar.

Monsoon’s next terminus is Gujarat and Madhya Pradesh, while it entirely covers remaining parts of Chhattisgarh, Jharkhand and Bihar. Simultaneously, it also make an entry in East Uttar Pradesh.

After this, we see a gradual slowdown in the progress of Monsoon, as it reaches its next point almost after 15 days. Around July 1, covering entire Uttar Pradesh, Southwest Monsoon knocks doors of Delhi, Uttarakhand, Himachal Pradesh and Jammu and Kashmir. Parts of Punjab and Rajasthan also start receiving Monsoon rains. Major cities such as Lucknow, Jaipur, Dehradoon, Shimla, Srinagar and Amritsar also begin drenching in Monsoon showers by then.

Thus, we can see that after marking its onset on June 1 in Kerala, Monsoon almost covers a month and a half long journey to cover entire India.

At the end, we would like to tell that Skymet Weather is expecting below normal Monsoon rains in 2019 to the tune of 93%, with an error margin of +/- 5 percent.