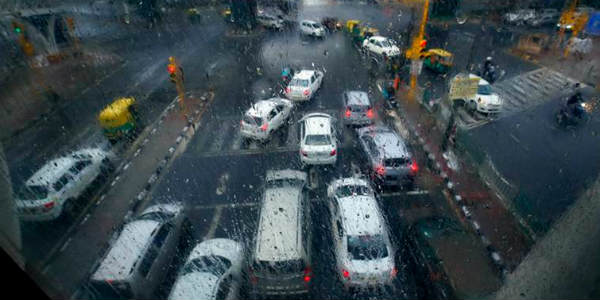 Delhi rains have made an appearance once again and boy, residents are confused. You’d like to know what the confusion is all about, well, rain in Delhi has made people think as to whether it is a sweater weather or a raincoat weather for starters.

Not only this, Delhi woke up to a series of heavy rains and hailstorms thinking it was still about 4-5 am only to find out after checking their phones and clocks that it was 8:00 am in the morning. Yes, it was as dark as that, even at 9:00 am, it looked like late in the night and it was nothing short of an apocalypse. Let us see what Twitter had to see regarding the apocalyptic Delhi Rains this morning:

Looks like night in #Delhi and NCR. Dense clouds with scattered #rains. On and off rains are expected until afternoon. #DelhiRain @SkymetWeather pic.twitter.com/0yKhyodS9H

Guess what time it is in Delhi? #delhirains #NOFILTER inclement weather will only lead to more people falling sick. Every single Delhi person I know is either sick or has someone in the family whose sick. Horrible #DelhiPollution only contributes further to the decline of health pic.twitter.com/ZVNJYXkyA5 — Monica Jasuja (@jasuja) January 22, 2019

Um, pouring rain, midnight darkness, thunder and lightning. It's apocalyptic weather in Delhi today morning, unlike anything I've seen in the past years.://

"One morning I got up at night" is quite applicable today.#delhirain#delhimetro #delhiweather — the 'VAIBHAV' (@kaatilana) January 22, 2019

The one good thing that came out with this was drop in pollution levels as rains in Delhi have washed away the pollutants giving Delhiites a reason to breathe freely. Other parts of North India, particularly Punjab and Haryana have also seen some heavy rains. Not only this, the desert state of Rajasthan was also lashed with heavy showers.

While it did sound an excuse to bunk work/school, traffic chaos has been on its peak including trains and air traffic. Heavy congestion was reported in several parts of the national capital and its adjoining areas of Gurugram, Noida, Faridabad and Ghaziabad.