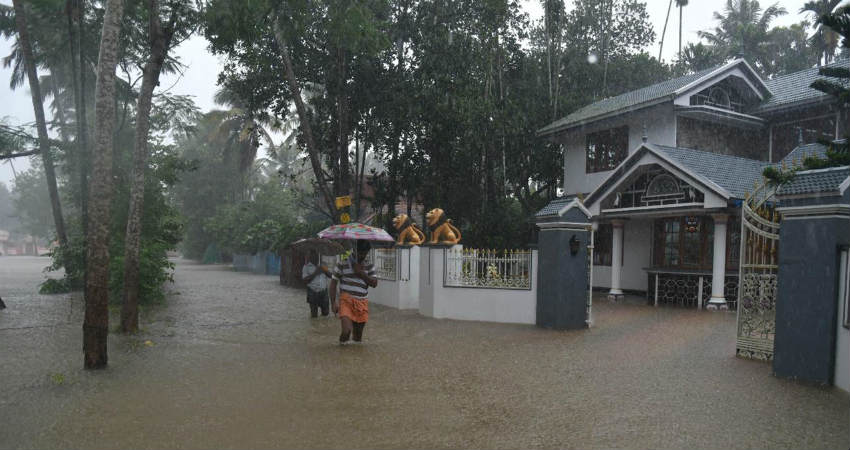 Updated on Aug 16, 11:30 AM: Rains reduce significantly across Kerala, flooding rains ruled out for next 3-4 days

As predicted by Skymet Weather, Monsoon rains have reduced significantly across Kerala during the last 24 hours. Most places recorded light rains only, with few moderate spells over isolated places.  In span of 24 hours from 8:30 am on Thursday, Karipur recorded 12 mm, Kozhikode 10 mm, Punalur 9 mm, Alappuza 8 mm, Kannur 5 mm, and Kochi 5 mm.

Now with the Monsoon surge weakening, we expect similar weather conditions to persist in the coming days. There would be massive relief from the flooding rains and only light rains would be seen over the state till August 21. Thus, no major flood threat is seen over Kerala.

We might see rise in rain thereafter, but heavy rains are not likely. Rains would only be moderate in intensity during that time.

Updated on Aug 15, 1:10 PM: Moderate rains with few heavy spells to continue across Kerala for next 24 hours

The state of Kerala received heavy to extremely heavy rains in the last 24 hours. While the city of Kannur recorded 45 mm of rains in the span of 24 hours from 8:30 am on Wednesday, Thrissur received 49 mm, and Kozhikode recorded 10 mm.

According to Skymet Weather, we can now expect some relief from these flooding rains in the coming days. Rains would start reducing on August 15 itself but moderate rains with few heavy spells would continue across Kerala for the next 24 hours. No significant rains and thundershowers are expected for the next three-four days over the state.

Addressing the media soon after chairing the weekly cabinet meeting, Kerala Chief Minister Pinarayi Vijayan said the damage that has been caused due to floods in Kerala this year is much less compared to the last years and announced immediate assistance of Rs 10,000 to each flood-affected family.

Updated on Aug 14, 4:10 PM: Kerala Chief Minister Pinarayi Vijayan announced Rs 4 lakh to the families of the people who died in the Kerala floods

With several parts of Kerala receiving downpour since Tuesday night, many low lying areas have been waterlogged, even as the toll in the rain-battered state has gone up to 95 so far. A red alert has been sounded for three north Kerala districts of Malappuram, Kannur and Kozhikode, which bore the brunt of the flood fury and landslides last week.

Updated on Aug 14, 3:15 PM: Flood situation in Kerala to improve gradually as rains to see reduction after 24 hours

Heavy rains may be seen in Kerala today as well, while the intensity of rains in the state will start to reduce tomorrow. However, there will be moderate showers with isolated heavy rainfall over the state during that time.

Rains will see a significant reduction by August 17, with only light rains and isolated moderate showers. Monsoon surge will also not be active until August 21, which will further mean that relief may be seen after some time in Kerala.

It will take a few days for Kerala to see reduction in floodwaters and easing out of the conditions with the situation likely to be bad for at least the next 24 hours or so.

As per weathermen, rains will continue over the state for the next 24 hours as well, which means, no relief from flood conditions for now. So far, 90 people have been reported dead while 59 remain missing during this time.

Updated on Aug 13, 12:00 PM: Intermittent spells of moderate rain and thundershower will continue at many parts of Alappuzha, Ernakulam, Idukki, Kollam, Kottayam, Pathanamthitta and Thiruvananthapuram, which are the southern parts of Kerala. Later, rain will intensify and spread over to the entire state. Furthermore, flood conditions are likely to worsen during next 18-24 hours.

The death toll in the state of Kerala has now reached 76 and as of now, 2.87 lakh have been sent to relief camps as floods continue to wreak havoc.

Floods in Kerala have been wreaking havoc, thus rising the death toll to 61. Three more bodies have been recovered from Malappuram and Wayanad. The rescue operations are continuously going on and 2.22 lakh people from 63275 families have been shifted to 1526 relief camps so far.

Updated on Aug 10, 06:10 PM: The Southern Railway announced the operation of special trains to and from Kerala to rescue stranded passengers. These special trains will operate on the Ernakulam-Chennai, Chennai-Kollam and Bengaluru-Kollam routes. Rahul Gandhi is likely to visit the flood-hit Wayanad district of Kerala on Sunday. He is the Lok Sabha MP from the Wayanad constituency.

Updated on Aug 10, 12:45 PM: Flood fury is still continuing in many parts of Kerala. Particularly, the northern parts of Kozhikode and Kannur have received more than 100 mm of rainfall during the last 24 hours. However, rain activities have gone down over Kochi and the southern districts which were also witnessing some heavy rains.

Updated on Aug 10, 12:55 AM: So far in Kerala, in view of heavy rains and floods, at least 64 thousand people have been evacuated to 738 camps. As per reports, over ₹1,000 crore damage is likely to public and private properties in the state.

Updated on Aug 6:15 PM: Nehru Trophy Race, which happens to be an iconic event in Kerala has been delayed. Last year also, this delay was seen due to floods in Kerala.

Updated on Aug 3:30 PM: Kerala CM says that a 24 hour control room has been set up at the State Police headquarters to assist those affected by the rains and people can reach the emergency response centre by calling 112. The system is linked with all control room vehicles in the State

Updated on Aug 9, 1:20 PM: Indian Navy opens its airport INS Garuda for civil aircraft operations in Kochi due to non-availability of the civilian airport there.

Updated on Aug 9, 12:35 PM: Traffic movement through Pattambi bridge stops as heavy rains causes the bridge to be flooded due to the Bharathappuzha river overflowing.

Updated on Aug 9, 10:15 AM: Heavy to very heavy rains to continue in Wayanad, Idukki, Malappuram, Kochi, and Kozhikode

No relief in terms of rains is expected for the next two to three days. Heavy to very heavy rains will continue  in parts of Wayanad, Idukki, Malappuram, Kochi, and Kozhikode which also remain on red alert. 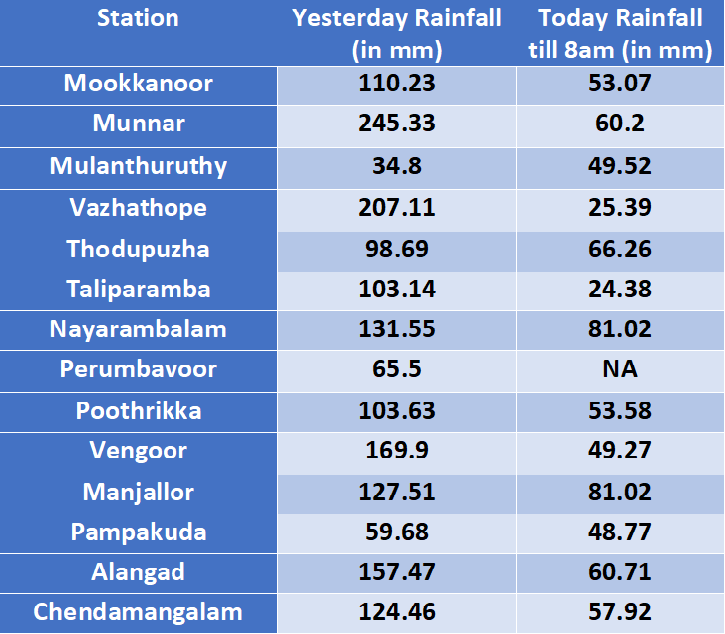 Check out the rainfall data of Ernakulam today and yesterday

Updated on Aug 8, 1:15 PM: Predictions of heavy rainfall, Idukki, Malappuram and Kozhikode districts on Red Alert for the next 24 hours.

Updated on Aug 8, 6:30 AM: Holiday announced for schools, colleges in Malappuram and Wayanad districts

As heavy rains continued to pound Malappuram and Wayanad districts, the district authorities have announced holiday on Thursday for educational institutions. The Malappuram district collector in a release said holiday has been announced for all educational institutions, including professional colleges, Kendriya Vidyalayas, Anganwadi and Madrasas located in the northern Kerala district.