As the March arrives, the month also announces the commencement of the pre-Monsoon season, which is also known as pre-Cyclone season. Heat starts building up over southern parts of the country on account of increasing heat potential in the ocean waters.

One of the essential characteristics for formation of a storm is shifting of ITCZ (Inter Tropical Convergence Zone) northwards. ITCZ is basically an equatorial trough which starts shifting towards Northern Hemisphere, as the sun crosses the Equator. The day when sun crosses the equator is marked as Spring Equinox, which happens to be around March 20.

Thus, we can expect cyclonic storms during the later half of March. However, probability of formation of cyclones is very less. This can be ascertained from the figure that there have been only 5 cyclones formed between 1900 and 2019. None of them had made landfall over the landmass as a cyclonic storm. 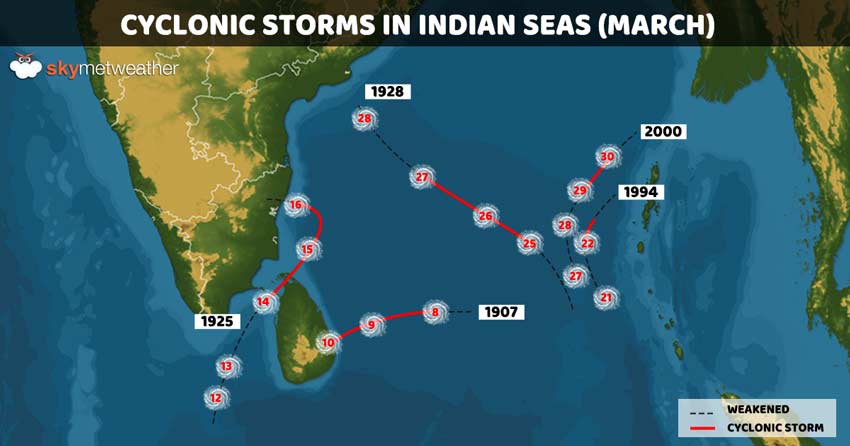 In  fact, all of them had been in Bay of Bengal or Indian Ocean and nil in Arabian Sea. Weather conditions for formation of cyclones are more conducive in Bay of Bengal on account of warm waters, while Arabian Sea, particularly the northern parts are known for cold sea temperatures.

Out of these five, the closest and strongest storm was that of 1925 that had formed around mid march, with striking range somewhere between Sri Lanka and Tamil Nadu.

The latest cyclone in the recent history of March was in March 2000, which also happens to be the only cyclone of 21st century so far. This storm in southern Bay of Bengal had appeared as a feeble system towards month end, around March 27.  It had intensified into a cyclonic storm by March 30, attaining speed up to 85 kmph recurving north-northeastwards. However, it had weakened before making landfall as approaching landmass led to increased wind shear.

According to weathermen, ocean waters have extended memory, wherein duration for retention of heat or cold is much larger than land. While over the landmass, we see surge in temperatures by at least 9-10 degrees in span of a month itself, however sea temperatures see a change just in few decimals that too in series of months.

Therefore the over lapping months of March generally devoid of any major cyclongenisis in the Indian seas. There had been few low pressure areas or depressions that had formed in March but they had failed to intensify due to lack of heat potential.

We are in the second half of February and are likely to enter March in span of 10 days. But it seems that 2020 would also be not too different. Ocean waters do not seem to be much in favour for formation of a cyclonic storm in the initial month of pre-Monsoon season.

As per weathermen, chances are very bleak for a storm but exceptions cannot be ruled out. Thus, we need to wait and watch.