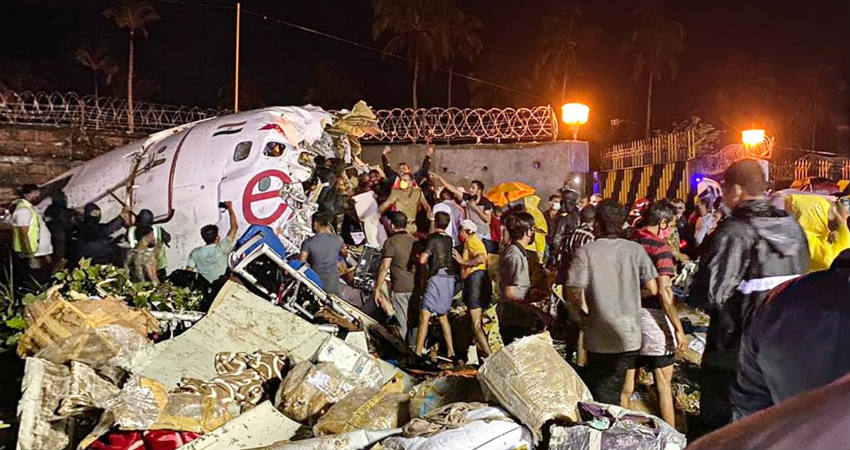 Air India Express AXB 1344, the flight as a part of Vande Bharat Mission with 191 people on board crash-landed at Kozhikode at 1941hr on 07th Aug2020. A very unfortunate and traumatic accident claiming 18 lives including the Captain and Co-Pilot and leaving many others injured with few of them critical. We at Skymet express our heartfelt condolence to the bereaved. Also, wish a speedy recovery to the injured and extend wishes to get well soon.

The inquiry has been ordered to ascertain the cause of the accident. But in the absence of both the pilots steering this fateful flight, the task of investigating the team becomes arduous for want of first-hand information. Surely the composite team will have the expertise to critically analyze and bring out the exact or plausible cause of the accident.  It will not be prudent to speculate without solid reasoning to apportion blame someone or bail out completely.

As per the Aviation Safety Board data, nearly 90% of the aircraft accidents occur on' take off the roll' or 'landing run'.  Accidents at cruising levels are mostly attributed to technical failure including instrumental error. The aviation sector is fraught with inadvertent risk and danger and the complications surely have far-reaching consequences.

There are three main causes of any flying accident:  Adverse Weather / Technical Failure / Pilot Error. It could be any one of these or a combination of more than one.

Adverse Weather: Inclement weather will have a range of elements that individually as well as a set of those could result in disaster.

Winds: Prevailing winds have a big role to play in ease of landing. The landing and take-off are always done into the wind unless there are some restrictions or sufficient reasons to overrule. The runways are oriented based on the likely wind pattern throughout the year at the respective locations. The process provides sufficient lift on take-off and a good amount of resistance on landing. Any strong tailwind or crosswind may prove detrimental, more for landing than take off. A strong downburst (microburst) can shove the aeroplane, approaching for landing, down into ground either due to wind shear or brute wind force. Wind speeds of gale-force prevailing at any aerodrome restrict/stop the flying operations.

Visibility: The visibility criteria for landing and take-off is stipulated depending upon the capability of flying machines and the avionics both at the ground and onboard. The pilots are categorized and the flying operations are limited to their rating and capability without any compromise. The visibility at an airfield may reduce due to fog, dust, smoke or rain resulting closure of flying operations.

Clouds: The cloud ceiling at or below a certain height can hamper landings as it may become difficult to spot the runway due to obscurity, even after reaching MDA (minimum descend altitude), the height at which the pilot has to take over visually to carry out the landing. The approach radar of the airfield can align the aeroplane with the runway but the pilot has to take over manually after reaching a specified distance from the touchdown.

Rain: The precipitation in the form of rain/thundershower/drizzle/snow can reduce the visibility to below the minima of the pilot and make the landing/take-off difficult. The hailstorm, lightening etc, if accompanied can cause structural damage even to the extent of a crash landing. Any waterlogging on the runway can result in aquaplaning and lead to ineffective braking during a hard and high-speed landing.

Technical Failure: These can happen at any stage of flying including cruise and level flights.

Engine seizure, instrument failure/error, or structural collapse are the common causes to list a few. The problem aggravates when flying over large stretches of oceans where it is not possible to make an emergency landing in a short duration. A simple thing like a bird hit on take-off roll can result in engine failure leading to a grave emergency. Most aeroplanes now have two or more engines but a failure at a critical stage can lead to a disaster.

Pilot Error: The human mind is subject to error under various circumstances. Even masters in their respective fields have committed blunders in aviation history. Decision making at the heat of the moment is poised with risks and paucity of time in flying operations makes it penultimate.

The disastrous crash landing at Kozhikode is a chilling reminder of fortuitous flying operations at some of the tabletop runways. Did we learn anything from the Mangalore crash of 2010? The tabletop runways do not have the essentials of sufficient undershoot and overshoot areas filled with soft ground arresting. Though a runway length of 9000 feet is considered good for Boeing 737 class aircraft. Such aeroplanes are operating even at shorter runways like Madurai, Jammu and a few others. Yes, a capacity full aeroplane with 191 passengers will surely prefer longer strip to accommodate large momentum.

The airfield was raining but the visibility of 2000mtr is not considered poor by any standards. It rained just 20mm in three hours (5.30 pm - 8.30 pm). Yes because of intermittent rains, the runway could be waterlogged or wet. The aeroplane attempted third landing and that too for runway 10 which has the tailwind of 12 Knots at that time. Obviously it will take a longer space to halt the aircraft. The earlier two unsuccessful attempts for runway 28 would also deplete the fuel state. The experts will find whether a long Dubai-Kozhikode flight to the full capacity and two overshoots had sufficient fuel left to land at other diversionary airfields.

The international airfield of Kozhikode has all the navaids to assist the pilot to make a landing in marginal weather conditions. The investigations will bring out the facts of any failures on this count. Most importantly the aviation regulator DGCA has to take a tough call for the continuation of flying operations at such airfields where aircraft has a history of herring off the runway on landing in wet conditions.

About the author: AVM GP Sharma, is currently serving as President (Meteorology and Climate Changes) in Skymet Weather, and have served Indian Air Force for decades of years.

The views and opinions expressed in this article are those of the author based on his knowledge and experience and do not necessarily reflect the views of Skymet Weather.