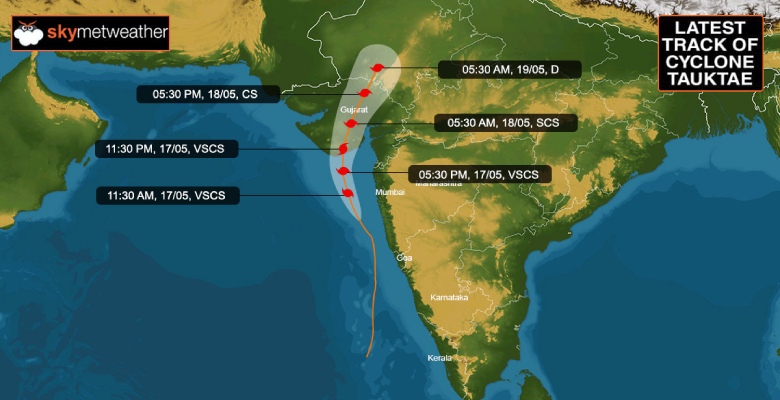 Cyclone Tauktae has further intensified to an Extremely Severe Cyclonic Storm with wind speed going up to 200kmh in the inner ring. The storm is centered around 19 Degree North and 73.1 Degree East and has moved northwest in the past 6 hours with a speed of about 16kmh. Cyclone Tauktae is abeam Mumbai about 120km away over the East Central Arabian Sea and a little over 200km from Veraval. The cyclonic storm will move more of northward heading for the Gujarat coast.

The cyclone is an extremely severe system, equivalent to Cat-IV hurricane, just one stop short of the topmost category Super Cyclone. It is still intensifying and increasing its wind potential.

The storm continues to have an eye of about 25km in diameter which is well defined but is likely to become ragged in the next 6 hours.

The storm continues to be in favorable environmental conditions with low vertical wind shear and high Sea Surface Temperature (31 degrees). The storms also remain compact with cloud bands wrapped tightly around the center.

The cyclone will be heading a little rapidly towards the Saurashtra coast and possible landfall in the late evening or early night today (1900 - 2200 hr), between Diu and Bhavnagar, somewhere close to Jafarabad in Amreli district. Extremely strong winds in excess of 150kmh and touching 180kmh are expected along with torrential rains over Mahuva, Bhavnagar, Amreli, Diu, Junagarh, Gir Somnath, and Porbandar districts. While approaching close to the coast, due to increased wind shear, terrain interaction, entrainment, and relatively cool water, the storm may lose a bit of its steam but still remain powerful enough to batter these districts. The storm after crossing the coast will gradually weaken to a cyclonic storm and likely to spend nearly 12hr while moving across Saurashtra towards North Gujarat. Utmost caution is needed to secure life and assets, including evacuation from vulnerable areas to safe shelters. Expect a lot of damage in terms of uprooting trees, snapping of power lines, and felling of electric poles along with disruption in communication and connectivity. Inundation due to heavy rains and storm surge in excess of 15feet is quite likely. Advise adopt all precautions as restoration work after the storm will be a time-consuming process.