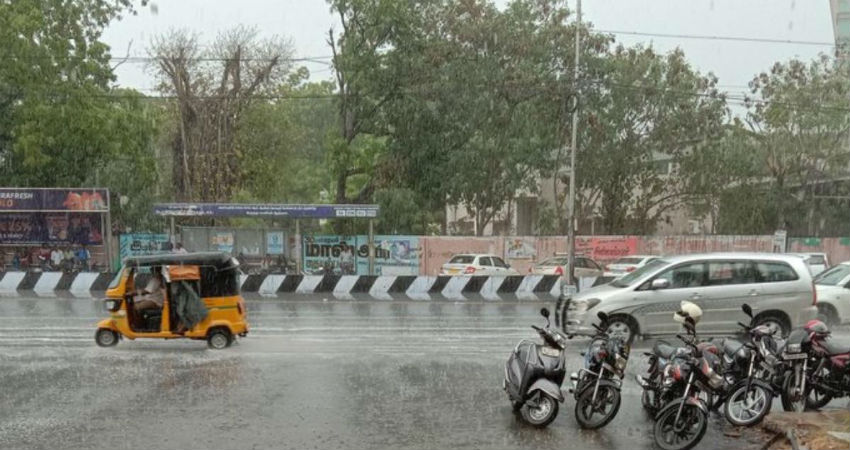 The capital city of Chennai has received 18.3 mm of rainfall in a span of 24 hours from 8:30 am on Friday. A Cyclonic Circulation has formed over Southwest Bay of Bengal and a Trough is extending up to South Tamil Nadu from this system. Thus, the rainfall activities are likely to increase today in parts of Coastal Tamil Nadu. Chennai may receive moderate showers with isolated heavy spells during the next 24 hours.

The Cyclone Kyarr over the east-central Arabian Sea is enhancing the south-westerly winds over Kerala but almost dry westerly winds are prevailing over Tamil Nadu. As per our experts, no significant increase in rainfall activity is expected over the state for at least the next two days.

The rains are likely to increase marginally on October 27. On October 28 and 29, there can be moderate rains with one or two heavy spells over the coastal stations of Tamil Nadu including Chennai.

During the last two days, Chennai rains have remained on the lower side only. However, our meteorologists have predicted an increase in the intensity today as there are chances of moderate rain with one or two intense spells during the next 24 hours.

Updated on October 23, 01:30 PM: Rains to ease a bit over Chennai, to continue thereafter

The Well Marked Low Pressure Area over Bay of Bengal may soon intensify into a Depression. The system may enter the land close to the North Andhra Pradesh coast.

Thus, as the system continues its northward movement rains are now expected to decrease over North Tamil Nadu including Chennai. Thus, mainly light to moderate spells are expected over Chennai for the day today. These rains are likely to intensify into moderate showers by tomorrow.

As of now, these rains are likely to continue for next three to four days. Along with these strong gusty winds will blow over the city.

Moreover, we expect rains to intensify further today.  According to weathermen, the ongoing rains are on account of a cyclonic circulation over Southwest Bay of Bengal off the Tamil Nadu coast. Now, the system is likely to induce a low-pressure area in the Bay of Bengal during the next 24 hours. Besides this, a trough is also running along the East Coast from Tamil Nadu to Andhra Pradesh coast.

With this, moderate to heavy rain and thundershowers would continue to lash most parts of Chennai and nearby areas on Monday. In fact, likely low-pressure area would enhance rains further on October 23, which might even see very heavy rains.

As predicted by Skymet Weather, Chennai rains have once again started lashing several parts of the city. Rain bearing clouds had engulfed the city during the morning hours, along with thunderstorms and moderate winds. The city has been recording rains for the straight seventh consecutive day, with showers in no mode to recede in coming days as well.

In span of last 24 hours from 8:30 am on Saturday, the Nungambakkam Observatory has recorded 8 mm of rains. Today, we can expect light to moderate rains and thundershowers with few intense spells in Chennai and near by areas. Rains are likely to continue through out the day, with some short break in between.

On account of a low pressure area likely to form in Bay of Bengal by October 21 or 22, rains are likely to increase marginally on Monday and further on Tuesday. On Monday, we can expect moderate to heavy rains, while Tuesday can expect few heavy to very heavy rains.

Temperatures have taken a dip and are settling below 30 degree Celsius only, paving for pleasant weather conditions.

Updated on October 19, 11:30 AM: Rains to again become heavy in Chennai after a short break

Chennai  (Nungambakkam Observatory) in a span of 24 hours, from 8.30 am on Thursday up to 8.30 am on Friday had recorded heavy rain of 101 mm. The intensity of rain in Chennai, however, reduced thereafter and in the last 24 hours, only 5 mm of rain has been witnessed at the Nungambakkam Observatory that was lashed by heavy rains. But meteorologists at Skymet say that rainfall activity is again going to pick up pace in Chennai by October 22 where the city is likely to record some heavy rain. The Northeast Monsoon has already made an onset and Tamil Nadu receives some really good rain during this period.

Updated on October 18, 11:00 AM: Chennai receives 3 digit heavy rains for the first time in the season

As a Low-Pressure Area is soon expected to develop over Southwest Bay of Bengal of Tamil Nadu coast which will unleash heavy rains over the state. Therefore, chances are bright that Chennai will surpass its monthly average rainfall this year.

On and off light Chennai rains have been making an appearance over the city for the last one week. However, rains picked up pace during the last 24 hours, wherein the city recorded moderate showers to the tune of 30 mm. Well, this can also be attributed to the early onset of Northeast Monsoon over the region, which was declared on October 16.

October is known to be the second rainiest month for Chennai, with November being the rainiest. The city is one of the prime beneficiaries of the three-month-long Northeast Monsoon, during which Chennai records over 60% of its annual rainfall.