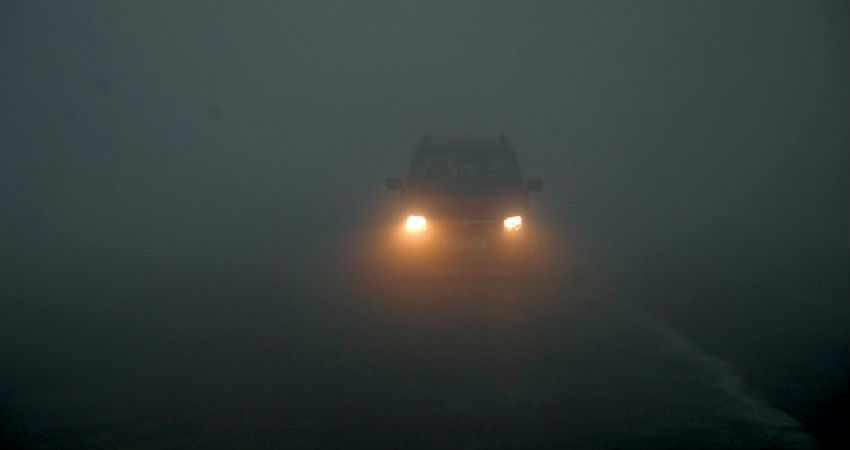 Today, Delhi woke up to a foggy morning with visibility falling as low as 50 m over most parts. One or two pockets even recorded visibility close to nil. This led to multiple cases of traffic disruptions throughout the city. Also, the airport had to hold down flights before the fog layer cleared a little.

Delhi received some light showers later in the night a day before yesterday. However, during the last 24 hours, the weather over Delhi and the adjoining region remained mostly dry. Despite this, conditions remained mainly favourable for dense fog formation. At present, cold northwesterly air are reaching the city all the way from the snow-clad mountains. Also, this air turns out to be humid in the wake of an active Western Disturbance affecting the hills at present. Already it’s been raining in states located in the vicinity of Delhi.

These foggy conditions are likely to continue during the next two to three hours. Following this, the air will clear out as Sun shines.

At present, the sky conditions are mainly obscure due to the dense fog layer. Sky will become partly cloudy towards the afternoon hours.

The weather is likely to remain dry over the city today as well.

Further, night temperatures are likely to decrease by one to two degrees as the sky clears by tonight. During the afternoon hours, the day maximum temperatures are expected to remain close to 17 degrees.

The pollution level which was in ‘satisfactory’ to ‘moderate’ category due to the recent rains yesterday, has now deteriorated. At present, ‘moderate’ to ‘poor’ air is being recorded over the city due to foggy conditions.

These foggy conditions are likely to be seen tomorrow morning as well. Thereafter, its layer will be weakening as the surface winds will be strengthening.