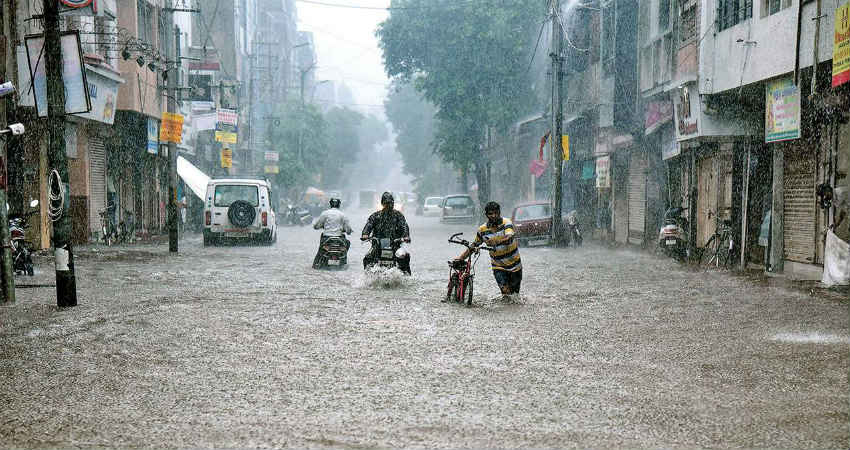 Updated on Aug 5, 8:00 PM: Moderate intensity of rains to continue in Surat

The weather system which brought rains is clearing the region, and next 24 hours will see very little rains. However, Surat, Vapi, Navsari, Valsad may see moderate rains. Other parts of Gujarat, will see light to moderate rains, for the next 4-5 days.

“Thirteen marooned villagers at Lahura and Kosadi of Mangarol taluka in Surat district were rescued by two IAF helicopters which took off from Vadodara and Surat,” a defence official said.

Several low-lying villages have been flooded and National Disaster Response Force and Air Force teams are in the region, mainly south Gujarat districts of Surat, Valsad, Narmada and Bharuch, for rescue and relief operations.

Updated on Aug 4, 2:30 PM: Heavy to very heavy rains continue to batter many parts of Gujarat on Sunday as well. In fact, places such as Surat, Vadodara and Ahmedabad are already reporting rain and thundershowers and showers are likely to pick up pace during the day. Intense clouding could be seen over many parts of Gujarat and Saurashtra.

According to Skymet Weather, Monsoon 2019 continues to be active over South and Central Gujarat. With this, weather conditions remain conducive for heavy to very heavy rains on Sunday over the region including places such as Valsad, Vapi, Surat, Vadodara, Bharuch, Gandhinagar, Ahmedabad, Vallabh Vidyanagar, Bhavnagar, Botad, Mahuva, Amreli, Somnath, and Junagarh.

These torrential rains have already led to local rivers over flowing. Reportedly, Kim river in Surat has surpassed the danger level over 11 meters. Auranga river in Valsad has also witnessed huge inflow of water and running at the danger-mark.

These rains can be attributed to the prevalence of various Monsoon systems such as the off-shore trough running across the West Coast, a cyclonic circulation over northwest Bay of Bengal and adjoining coastal areas of West Bengal and Odisha and a convergence zone is also seen South Gujarat coast. Strong winds from the Arabian Sea are also reaching over the state.

Any relief is only expected after next 24 hours, when rains would start reducing.