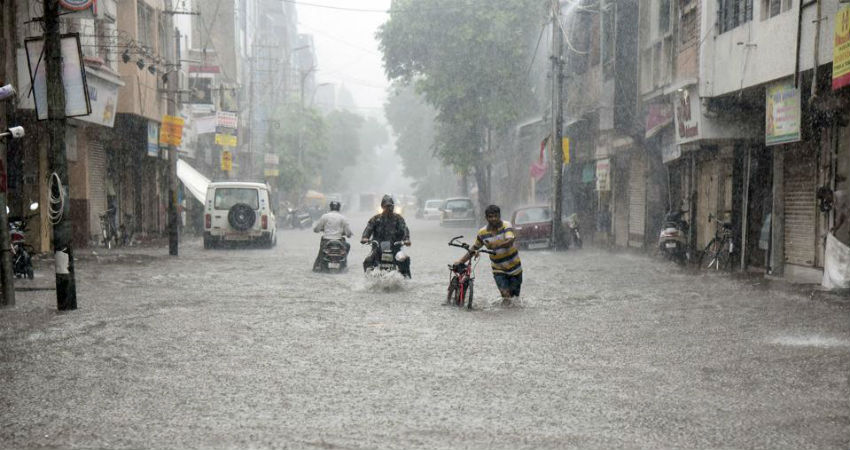 Updated on Sep 10, 12:30 PM: Vadodara records 92 mm of rain, light to moderate rains expected over Vadodara for another 24 hours

In a span of 24 hours, from 8:30 am on Monday, Vadodara has recorded extremely heavy rain to the tune of 92 mm, while Surat observed 69 mm of rain. Light to moderate rains would be a sight over Vadodara for another 24 hours.

In a span of 24 hours from 8:30 am on Sunday, Bhavnagar has recorded 115 mm rainfall, followed by Porbandar 90 mm, Valsad 82 mm, Gandhinagar 67 mm, Rajkot and Bhuj 34 mm each, Surat 7 mm, Ahmedabad 4 mm and Vadodara 2 mm. Moderate showers are likely in Vadodara and Ahmedabad for the next 48 hours.

Read in detail: Good rains in Vadodara to continue

With some major weather systems persisting, heavy rains are likely to continue in Surat, Valsad, and Vadodara, while Ahmedabad and Deesa may receive moderate showers. One or two places might even experience a flood-like situation.

Widespread moderate rainfall with a few heavy spells are likely over the region. Significant rains are possible over major cities such as Ahmedabad, Gandhinagar, Rajkot, Surat, Vadodara and Junagarh in the next 24 hours.

Read in detail: Heavy rains ahead for Vadodara

Monsoon rains have returned to the state of Gujarat. And in a span of 21 hours until 5:30 am today, Vadodara has recorded 28 mm rains.

Updated on Aug 26, 12:50 PM: Monsoon rains in Ahmedabad, Vadodara, Rajkot and Surat during next 24 hrs

In the last 24 hours, Ahmedabad and Vadodara received light rains, while moderate spells were seen over Sabarkantha and its adjoining areas.

The experts have to say that today rains will be seen over Ahmedabad, Vadodara, Gandhinagar, Bharuch, Surat, Palampur, Sabarkantha and gradually the rain activities will cover Bhuj, Surendranagar, Rajkot, and Jamnagar by tomorrow.

Read in detail: Monsoon rains in Vadodara during next 24 hrs

Updated on Aug 6, 1:50 PM: Moderate to heavy rains in Ahmedabad, Vadodara, Valsad, and Surat from August 8

After flooding several parts of Gujarat, Monsoon rains have slightly eased out in the state. There has been a decrease in rain intensity across Ahmedabad, Vadodara, Surat, Valsad, and Gandhinagar.

However, the presence of the Monsoon surge will continue to pour rains over these areas, though of reduced intensity. But this break would be a brief one as heavy Monsoon rains are once again gearing for Gujarat. Ahmedabad, Vadodara, Valsad, and Surat would see moderate to heavy rains again from August 8.

Updated on Aug 6, 10:00 AM: Rail traffic remains affected despite reduction in rain in Vadodara

While rains in Vadodara have reduced to quite an extent, it was the rail traffic which continued to suffer.
Now, trouble is for traffic from Kim-Kosamba stretch which has not been fully functional due to water inflow.  Moreover, due to this, the train traffic was suspended between between Kim and Kosamba railway stations.

Shatabdi Express and Paschim Express were halted at Kim and Kosamba stations. While water is not touching the tracks, they are flowing above danger levels at Kim and as a precautionary measure, no movement is allowed on the stretch.

Updated on Aug 5, 07:20 PM: Rains in Vadodara have reduced to quite an extent with the city recording just about 2 mm in the last nine hours. Moreover, this will help in flood waters receding further and helping the residents go back to normalcy.

Updated on Aug 5, 09:00 AM: Rain in Vadodara has now witnessed a reduction and so have the flood waters. As rains reduce, flood waters have started to recede from the city as well.

Moreover, another problem arose in Vadodara after crocodiles were seen on seven different spots in Vadodara. As per weathermen at Skymet, rain in Vadodara is all set to reduce and relief is in sight for the city. Now, as waters reduce and city crawls back to normalcy, sanitation drive has begun in the city so as to prevent water borne diseases spreading in the city.

Medicines have been provided to 15,000 people with a sanitation drive conducted by 147 teams of the municipal health department

Updated on Aug 4, 6:00 PM: The Vadodara Municipal Corporation has also issued an alert for heavy downpour for the next 36 hours, telling residents to stock food and consumer durable supplies and warning them to stay indoors

Updated on Aug 4, 4:00 PM: Surat, Vadodara and Ahmedabad are already reporting rain and thundershowers and showers are likely to pick up the pace.

More than 100 people who were trapped in the low lying area in Vadodara have been rescued and shifted by police and local administration officials.

The active monsoon trough is extending from South Gujarat to Karnataka, and another upper air trough is extending from Gujarat to coastal Odisha across Gujarat and Maharashtra. Due to these systems, many parts of Gujarat is receiving heavy to very heavy rainfall except Kutch. In last 24 hours (from yesterday 8:30 am till today 8:30 am), Vadodara has received heavy rainfall of 55mm, and rain to continue over the city in the next 24 hrs and decrease thereafter.

Normal airport operations have been restored at Airports Authority of India's Vadodara Airport in less than 24 hours after heavy rainfall across the city and nearby areas.

Two more deaths were reported in the city of Vadodara on Friday as the toll rose to seven, due to heavy rains and flooding in major parts of the city.

Updated on Aug 2, 05:00 PM: Another two days of good Monsoon rains in Vadodara

After experiencing flooding rains, the intensity of Monsoon showers has decreased in Vadodara. However, moderate rain to the tune of 22.8 mm was observed in the city in 24 hours from 8:30 am on Thursday. In the wake of this system, moderate rains with one or two heavy spells may continue in the Gujarat region for the next 24 to 48 hours. Thereafter, rains may taper down. Vadodara to see good rainfall activities.

The chief minister also announced a compensation of Rs four lakh for the kin of four persons, who were killed after a wall collapsed in Chhani area of Vadodara city.

"We are also hereby announcing that the state government will pay cash-doles for three days, according to legal provisions, to those who had to be evacuated to safer places due to flooding and couldn't go for work. All residents, who had been affected by floods and had to be shifted to safer places and whose names are there on the survey list, will get cash-doles. The poor, whose households items have been washed away in the flood and have suffered large-scale losses, will also get compensation," CM Rupani said.

Updated on Aug 1, 08:20 PM: 69 trains cancelled due to heavy rains in Vadodara, Army helps evacuate people stranded on the station.

Updated on Aug 1, 08:00 PM: Schools and colleges to remain shut in Vadodara on Friday.

Updated on Aug 1, 06:00 PM: Some 32 teams state-owned power distribution companies (DISCOMS) - PGVCL, UGVCL and DGVCL - have been called in to handle the power situation in Vadodara.

Updated on Aug 1, 11:00 AM: 5 trains cancelled due to heavy Vadodara rains and waterlogging

Updated on Aug 1, 08:22 AM: Heavy rains in Vadodara to take a backseat now, situation to slowly improve

Rains have drastically reduced over Vadodara with the city recording just about 3 mm in the last 9 hours between 8.30 pm yesterday and 5.30 am today. With this, the total rains in the last 21 hours are at 557 mm.

As per weathermen, heavy rains will take a backseat today and only light to moderate showers are expected. Rains will become even lighter tomorrow onward.

Updated on Aug 1, 08:12 AM: Over 100 people rescued from the flooding waters of the Vishwamitri river in Vadodara

According to the State Emergency Operations Centre, more than 100 people have been rescued from the flooding water of the Vishwamitri river in the Bhayli district of Vadodara, following the heavy downpour. Instructions have been issued by the District Collector of Vadodara to keep all the government and private schools closed on Thursday.

Updated on Aug 1, 01:30 AM: 400 motor pumps will reach by morning to flush out water from waterlogged low lying areas.

Incessant rainfall for more than 12 hours flooded major parts of Vadodara even as river Vishwamitri that flows through it, was just a couple of feet below the danger level. Several people were either stranded in offices or had to wade back home through flooded streets. All schools have been declared closed on Thursday by the district collector.

After heavy rain lashed Vadodara, the vehicles were seen driving through waterlogged roads, some trains have been cancelled and the airport has also been temporarily shut down. After the heavy rainfall hit Vadodara, it took only a couple of hours for commuters to find themselves stuck in traffic jams. Due to waterlogging at Vadodara, train nos 12917 Ahmedabad -Nizammudin, 11463 Veraval-Jabalpur & 19309 Gandhinagar-Indore Express will be diverted via Anand-Dakor-Godhra. Train no 19422 Patna-Ahmedabad will be diverted via Godhra-Dakor-Anand.

The state of Gujarat had not witnessed very good Monsoon rains for quite some time now. However, it seems like rain Gods have become far too kind, moreover, brutal towards the city of Vadodara.

In fact, these rains have caused enough chaos over Vadodara with rain waters inundating the homes of residents.

Very heavy rains have lashed the city of Vadodara today with records being broken in just about 12 hours time. In fact, in the last 12 hours from 8.30 am today, Vadodara has received a whopping 554 mm of rainfall which happens to be the highest 24 hours rains ever witnessed by the city.

These rains can be attributed to the active monsoon surge along the west coast. Along with this, a Cyclonic Circulation can also be seen over Southwest Rajasthan which is enhancing the rains over the city and its adjoining areas.

After tonight, rainfall activity in Vadodara will see some reduction. Rains are expected to once again pick up the pace by August 2 and 3. Thus, the month of August is expected to begin on a rainy note.