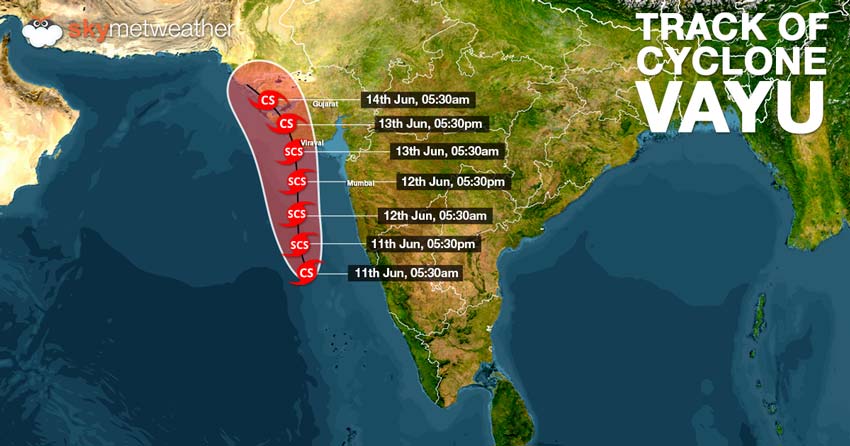 As predicted, the deep depression in east-central and southeast Arabian Sea intensified into a cyclonic storm Vayu during the wee hours of Tuesday. Vayu is presently centered at Latitude 14.7°N and Longitude 70.6°E over East-central Arabian Sea, around 490 km south­-southwest of Mumbai and 600 km nearly south of
Veraval.

The tropical would continue to intensify rapidly and would strengthen into a Severe Cyclonic Storm by Tuesday evening.

Vayu would be now tracking northwards, parallel to the West Coast during the next 24 hours. Cyclone Vayu is most likely to strike Saurashtra coast of Gujarat, between Porbandar and Mahuva around Veraval and Diu region as a Severe Cyclonic Storm by the late night of June 12 or early morning of June 13. At the time of crossing the coast, the areas such as Porbandar, Veraval, Jamnagar, Dwarka, Junagarh and Okha would damaging winds with the speed of 110­-120 kmph gusting to 135 kmph.

Heavy to extremely heavy rains are likely over these areas, which could possibly inundate low lying areas.

Mumbai would escape the fury of Cyclone Vayu, but it would see good rains and high velocity winds. Sea conditions are also likely to be rough to very rough along the Maharashtra coast on June 12 as the Cyclone Vayu passes by.

Fishermen are advised to exercise precaution and avoid venturing in deep waters during that time.

The depression in Arabian Sea has further gained more strength and became deep depression by Monday evening. The system is presently centered at latitude 12.5°N and 70.9°E, around 650 km south­-southwest of Mumbai and 850 km south-­southeast of Veraval.

Weather conditions have further become more conducive on account of warm sea surface temperatures and low vertical wind shear. As a result, we can expect the system to rapidly intensify into cyclonic storm by the morning of June 11. In fact, probable cyclone Vayu may also become more powerful and become severe cyclone in the subsequent 24 hours.

The system would be travelling parallel to the West Coast, maintaning the safe distance of 300 km. However, the probable Cyclone Vayu is not only going to brush Saurashtra coast but also going spend a lot of time near the coast of Gujarat.

Thus, Gujarat coast needs to be on alert as likely Cyclone Vayu is expected to sweep the area in terms of rains and squally winds for amount of time.

As predicted by Skymet Weather, the well-marked low pressure area over Southeast and East-Central Arabian Sea intensified into a depression in the wee hours of Monday. The system is presently centered at Latitude 11.7 °N and Longitude 71°E, around 800 km south­-southwest of Mumbai and 1000 km south-­southwest of Veraval.

The depression is moving in the favourable weather conditions of warm sea surface temperatures and low vertical wind shear. With this, it is likely to strengthen into deep depression by the evening of June 10 and subsequently into a cyclonic storm by June 11. By this time, the likely cyclone Vayu would be near Konkan & Goa coast, abeam Mumbai with a distance of 300 km.

The system would continue to move in north-northwest direction, parallel to the West Coast. The depression has given very heavy to extremely heavy rains over Kerala. In the span of 24 hours from 8:30 am on Sunday, Alappuzha recorded 106 mm of rain, Kottayam 92 mm, Kochi 91 mm, Thiruvananthapuram 58 mm, and Kanyakumari 36 mm.

Further as the system moves further north, the rain belt would also shift. During the next 24 hours, heavy to very heavy rains area likely over Coastal Karnataka and Goa. In the subsequent 24 hours, heavy rains would be seen in Konkan coast. Mumbai is also expected to record light to moderate pre-Monsoon rains in wake of likely Cyclone Vayu.

However, rain in Kerala would now see a dip but moderate rains cannot be ruled out as the moist winds wold now concentrate around probable Cyclone Vayu.

Gujarat has been put on alert as Vayu is expected to skirt the coast. According to weathermen, likely Cyclone Vayu would be nearest to the Gujarat coast around June 12. In wake of this, places in Saurashtra and Kutch regions are likely to gear up for torrential rains.

The low pressure area over southeast and adjoining east-central Arabian Sea continues to retain its strength during the last 24 hours. It remained practically stationed but cloud configuration and atmospheric conditions are indicating towards the system getting more marked.  According to weathermen, the system is likely to induce a depression during the next 24 to 36 hours.

After onset of Monsoon 2019, the likely cyclone has been responsible for giving some moderate Monsoon rains with few heavy spells over Kerala. Alappuzha recorded 66 mm of rains in span of 24 hours from 8:30 am on Saturday, followed by Thiruvananthapuram 32 mm, Vaikom 24 mm, Kochi 23 mm, Munnar 22 mm, and Punalur 12 mm.

With system remaining stationary for some more time, moderate to heavy rains would continue over Kerala and thereafter, reducing after 24 hours.

According to weathermen, as the cloud configuration gets more marked, it would start moving. This probable cyclone is similar of what we saw last year in form of Cyclone Mekunu. Mekunu had also stalled the advancement of Monsoon and even delayed the onset. It had also formed during June under similar circumstances.

Also Read: What Cyclone Sagar and Mekunu did to onset of Southwest Monsoon 2018

The only difference between Mekunu and probable cyclone is the track. While Mekunu tracked westwards towards Somali and Oman coast, the likely cyclonic storm would be heading north-northwest, most likely towards Karachi, Pakistan.

Updated on June 8, 2019 3 PM: The cyclonic circulation over Southeast Arabian Sea which has been responsible for the onset of Monsoon 2019, has become more marked during the last 24 hours.  It has finally induced a low pressure area and is seen over Southeast and adjoining east-central Arabian Sea.

According to Skymet Weather, the low pressure area has been travelling in favourable weather conditions i.e. open waters, warm sea surface temperatures to the tune of 30°C and low vertical wind shear. Thus, we can expect the system to intensify further into a well-marked low pressure area in the next 24 hours and into a depression thereafter.

In fact, it has the full potential to strengthen into a cyclonic storm or even into a extremely severe cyclone.  However, it is too early and we need to wait and watch for further growth of the system.

The system is likely to move in north-northwest direction, travelling parallel to the West Coast, but maintaining sufficient distance. As per weathermen, the system would be of no threat to the coast but would be instrumental in giving rains and strong winds right from Kerala to Konkan & Goa coast June 9 onwards.

The system would also be responsible for reviving Mumbai rains, which have been missing so far. We can expect light to moderate rains in Mumbai on June 11 or 12.

It may pose a threat to Saurashtra coast but it would not cross the Indian coast and may head towards Pakistan, near Karachi coast.  As the systems enters into North Arabian Sea, the potential cyclone would encounter with cold waters and decreasing sea surface temperatures. As a result, the system would become little soft.

If the cyclone forms, it would be the third cyclone of the season and the maiden for Arabian Sea. Formation of cyclone during the Monsoon season is a rare possibility but the absence of strong Monsoon surge may pave way for a cyclonic storm. It would be named as Cyclone 'Vayu'. Prior to this, was Cyclone Fani that had developed in Bay of Bengal and had hit Odisha coast.

Potential Cyclone in Arabian Sea and its impact over Monsoon 2019

While on one side the system aligned all the features of Monsoon and finally pulling the Monsoon surge over Kerala, on the other hand it would be the reason behind its sluggish advancement.

As the low pressure area continues to get more marked, moist winds would now concentrate over the system. As a result rains would reduce significantly reduce along the coast. Although, it would give some rains along coastal areas of Kerala, Coastal Karnataka and Konkan & Goa, but would be not be enough for further advancement of Monsoon.